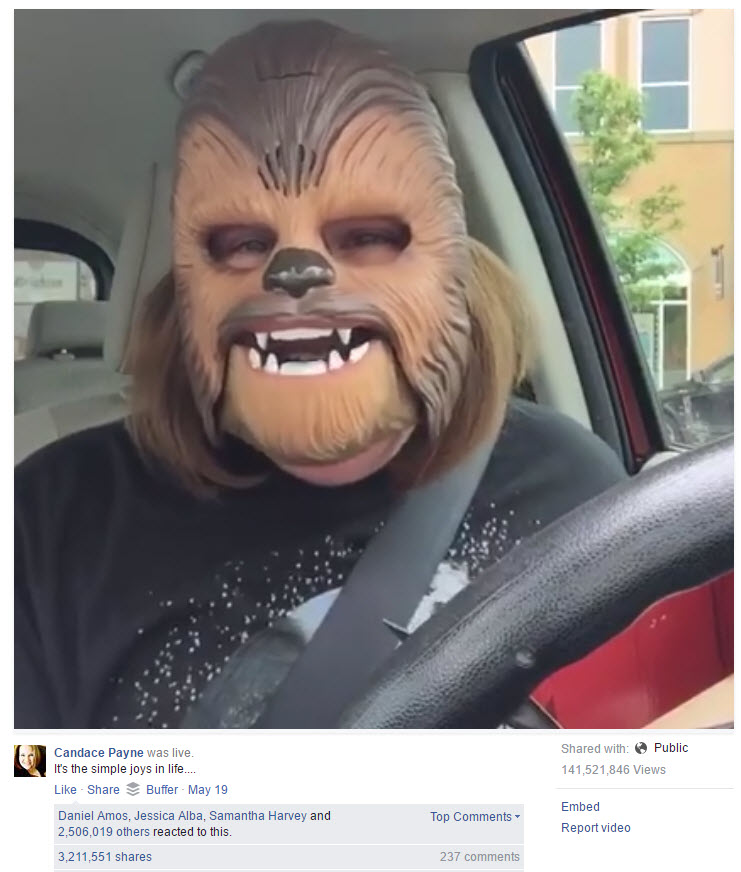 I, like so many others, watched Candace Payne’s modeling of a Chewbacca mask in laughing tears. Unlike so many other viral videos, this one left me having to share it with friends, but not on the Internet. No, I had to queue it up on my iPad so I could watch it with them, experiencing the same hysterical laughter (mine, not hers) all over again. Payne is right… It IS the simple joys in life.

Now, though, marketers are scrambling, trying to find a way to keep the momentum going for other products (ones they’re responsible for selling), and this has lead to the all-important question: How do you convey authenticity from a rehearsed script? The fact is, you really can’t. Sure, others have succeeded in duping us with their real – not real – stories, but in the end, we rolled our eyes over the wasted time and moved on.

Take, for example, the 2010 story about a girl named Jenny who shamed her boss and quit her job via whiteboard. This one appeared at The Chive, and it was seemingly real. On the following day we found “Jenny” was an actress, and it was all a stunt. Others, though, haven’t been so forthcoming about hoax posts and video, and when the truth comes out, viewership can suffer.

It’s interesting to see the hundreds of news reports about the “Chewbacca Mom”, and I’m thrilled that Kohl’s took too hooking her kids up with great stuff, along with a gift card and 10,000 rewards points. Payne has also been appearing in multiple videos and news stories, celebrating her new found “fame.”

Did Candace Payne earn this notoriety and all the extras that come with it? You bet. I’m a firm believer that if you can genuinely brighten peoples’ days, you should reap the rewards. And Kohl’s, who hit marketing gold with something the company didn’t even create, took the right action by giving back. What I’d really like to see, though, is marketers spending more time understanding what people really want in the form of advertising and supporting content, rather than hustling to see who can replicate Payne’s persona first. Because, the reality is, Payne wasn’t trying to sell anything. She wasn’t trying to impress anyone. She was simply sharing her thrill about a mask, not knowing she was going to touch millions. Not even the best Budweiser ad during Super Bowl could pull something like that off.

By the way, if you still haven’t seen the video, here is the direct link to it.