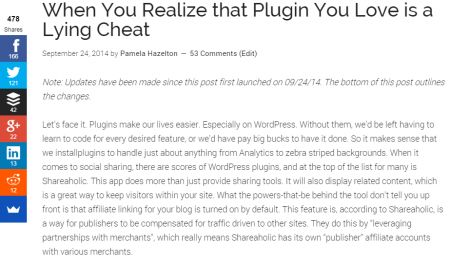 Last month I reported on various issues regarding the Shareaholic WordPress plugin and suite of apps. While the bulk of responses I received from users was supportive, I did get quite a few questions, some not so positive. And that’s okay. I don’t expect everyone to agree with my methods to push my findings out into the open.

I continue to receive questions daily. Some are posted on public networks, others are emailed to me directly. I figure it would be much easier if I answer them all here.

In no particular order, these are the questions I’ve been asked, and my replies.

If you didn’t like the apps, why didn’t you just uninstall it and go about your day? Why did you have to write a post about it?

I wrote the first post to let unsuspecting users know that the Affiliate Links feature was toggled on by default. Since Shareaholic wasn’t even advertised as a monetization app, there would be no reason for users to even think to look for settings that were managed from outside of a plugin (for which the plugin admin itself provided no actual direction).

I wrote about my findings after 6 hours of troubleshooting and another 6+ hours of research. I wrote it really because I was an unsuspecting user who fell victim to Shareaholic’s practice of making new features opt-out instead of opt-in.

Why did you feel you needed to lead the cause?

I was not the first person to write about these issues. There were at least two other bloggers who’d pointed out the Affiliate Links debacle. I just happened to write my post with the support of screenshots and video to prove what I wrote was true. It was never my intent to lead anything, but rather to inform users who might otherwise never know their links were possibly being rewritten. I don’t believe I have led any cause. I simply shouted a little louder than others.

I decided to push out links because the handful of major sites that are known for reporting on issues like this refused to post anything about it. While some explained the bulk of their audience wouldn’t know what Shareaholic was, others said they didn’t think it was that big of a deal. I have to say, though, that seeing as I don’t have a huge following on Twitter (at the time it was less than 1,000), my tweeting about this had little effect compared to the scores of websites that featured the post. Most of these were WordPress service and hosting sites that reached directly to the users and developers. Reddit users also pushed the news out there.

Why did you do a second post? Were you just digging for more dirt?

On the contrary. The second post dealt with additional issues that I just happened across after realizing I had a Shareaholic account and profile assignments I never knew existed. The way these accounts and profiles were auto-logged and managed put me at risk with my own clients. Again, I was an unsuspecting user who also had control over my clients’ tweets and followers in respect to the Shareaholic share buttons. While my clients trust me to do the right thing, they were concerned because someone else – such as a disgruntled employee or one-time installer – could have gotten those controls before me. It was another thing users needed to be aware of.

There were actually other things I found that I never reported. Mostly because they’re commonplace and expected in many plugins and apps, and they were covered (albeit not in-depth) in the Terms of Service. I was not trying to find things to nitpick.

Why didn’t you try talking to Shareaholic directly?

I did. I contacted them via support and via Twitter. I could not get any answers to my questions. After researching how they responded to countless others, I realized that all the things I wound up posting were not mistakes or bugs. They were intentional. I also know that Shareaholic management, its adivisers and its investors are very keen on what transparency is. They knew the drawbacks of launching a feature opt-out. They responded publicly how they thought users would be “delighted” and explained how it was “super easy” to toggle the feature off. But they’re not stupid. They knew full well people were going to complain. And plenty did, from day one. They tried to keep it controlled. I’m quite certain they thought the number of complainers would ultimately just uninstall the plugin and walk away. The complainers were a very small percentage of their user base.

Also, the VP of Product contacted me after my first post and requested a phone meeting. I obliged. Later that evening, after I’d replied to two posts in WordPress forums, I received an email stating that I was posting potentially slanderous information, and that I obviously had no intention to hear Shareaholic’s side. I replied explaining that I was very much interested in talking, and that I was happy to correct anything I may have gotten wrong. From that moment on, Shareaholic ignored me in every respect.

Why didn’t you give them time to fix things?

It’s hard to give a company time to fix things when they consistently respond that there is nothing to be fixed. Until my post went live, Shareaholic had 21 days to change the Affiliate Link’s setting to opt-in (and, I’m no app developer, but I know well enough that changing a “default” selection from on to off is neither time consuming nor difficult). The company made it clear that it launched the way it did intentionally, and that it wasn’t their fault if users who did not give them their email address were not notified.

Do you think they started making changes because you outed them, or because they are genuinely a responsible and caring company?

I have to be honest. During my research I found several instances of foul play by Shareaholic. I found, with accompanying proof, that these types of tactics were used at least twice previously. Do I think some of the recent changes were made because they realized people were definitely upset and started uninstalling their products? Absolutely.

Look, I know it’s easy to think that company’s that tout transparency are the real deal. Many of them are. But let’s not lose sight of what really happened here. Users were taken advantage of, and Shareaholic stood to make a lot more money from it. Again, they’re not idiots. The people running Shareaholic, including its advisers and investors, have immense experience in what they do.

I firmly believe that if Google had made such a setting opt-out, people would be screaming from the rooftops about it. They’d be threatening to sue. Some of them would sue. So, I ask this: If Google can’t get away with it, why should anyone else? Especially when the folks behind the scenes have just as much wealth of experience with how features should be launched and how accounts should be managed?

Do I take responsibility for Shareaholic making changes? Definitely not. Some of those, based on what’s rolled out the past few days, were already in the works. Some of the other changes? The reason behind those lies with the users who made it clear that some things were downright unacceptable.

What if [Shareaholic] was your company? What if jobs were lost?

First, if I ran Shareaholic this wouldn’t have happened. Yes, companies rely on numbers and revenue. Investors need to get a return. But this should never be done at the expense of the userbase – the very people who have gotten you where you are today. If I ran Shareaholic, I would have greatly incentivized people to give up their email addresses from day one, so they could be contacted and encouraged to sign up for things like Affiliate Links. While this would result in less sites generating revenue, it would have been an honest approach.

In the long run, Shareaholic could have graphed earnings and used reports to entice others to also sign up for link rewriting. The way Shareaholic launched the service not only resulted in a decline of users, but it also opened the company up to litigation.

Would I feel bad if any jobs were lost at Shareaholic? Sure. But let’s not forget that many users whose links were rewritten potentially lost revenue, and many consultants have reported that the account/profile association, as well as Affiliate links, put their work with clients at risk. I will side with the unsuspecting masses any day of the week.

Is it your goal to shut down the company?

That has never been my goal. I had two goals: 1. For users to be informed. 2. For Shareaholic to change certain methods so their users were not “victims” of unethical practices.

Why do you still talk about it?

While Shareaholic has made some changes, the company hasn’t addressed many key things, including updating the TOS to cover monetization and related topics. And whether or not any users who never opted-in themselves (mostly because they’re still unaware) have defaulted to opt-in. Since Shareaholic has not advised it’s addressing these issues, one can only assume that it is not – and that assumption is made solely for the sake of the users.

On October 1st, the company announced the release of Promoted Content, which injects advertising in a site’s Related Content section. Like many other features, this was turned on by default, with a “medium” setting applied. That means any user not paying attention to the Related Content links being displayed may unknowingly be showing ads to his visitors.

Also, while the company updated the WordPress plugin to include a monetization settings button, it still doesn’t make clear that in order to receive notifications or get paid an account must be created.

The average user of nearly any web service is not savvy about how everything works. He doesn’t realize, for example, that Shareaholic doesn’t have a means to contact him (because WordPress does not allow plugin developers to use the admin’s email address for notifications). He also tends to take instructions literally, so if the features listed don’t apply, he has no reason to create an account. And thus, he cannot get paid.

When they fix everything, will you take down your posts?

No, but I have also actively reported on any changes for the better that have been made. Unfortunately, none of that will change what was done, and current or potential users still have the right to know about it.