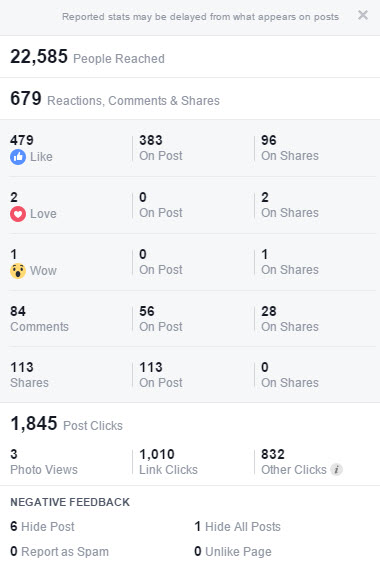 After just a day, Facebook’s Reactions is taking the social world by storm. Whether users love it or hate it, they’re using it. And we’re already seeing boosts in post engagement as a result.

Let’s take a look at some insights for a an interest page with 100K+ likes. Three posts were made throughout the day before Reactions launched. Based on the short lifespan of a post, we can see the difference between one posted mid-day, and the two in the later hours (which still had a little traction when Reactions was launched).

Let’s look at the engagement boost. It hopped from an average of 9% to 19%.

Now, we do have to consider that different types of posts, and the content of those posts, can affect engagement significantly. For the page above, all posts were equally topical. Note that the oldest post was an image (the rest were links). It had a reach of 114K, despite a low engagement rate of 7%.

To show I’m not looking at just big pages, here’s the same chart from a page with less than 10K likes. The average engagement rate here boosted by about 1.25%:

And here’s another from a page with just over 40K likes:

The numbers are real, but time will tell.

Reactions is only a day old. So the real test will be in a week, and then again in a month. Knowing the psychology of Facebook users, though, I’m willing to wager that we’ll see a similar trend over the coming months.

Facebook has made it easy for customers, fans and visitors to tell us what they think about the content we’re posting. While Reactions won’t always tell us why someone loves or hates what we have to say, they will give us a good indication of what our target audiences expect. Pay close attention to those “faces”. And embrace them, because – good or bad – they’re going to help you reach a broader number of people.