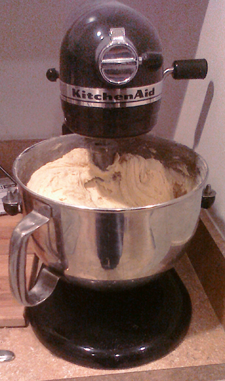 It’s that time of year again. With the holidays approaching, people are eating up bandwidth and ripping through gas, hitting the stores for the best possible deals.

Each year I spend countless hours in the kitchen baking cookies, pies, and just about anything else that requires setting the oven at 400 degrees or less. But it’s not just about making my family fatter (trust me, the taste-testing of each batch is enough to do that). It’s about giving back. Yes, we donate monetarily to various organizations – even as gifts to some of our relatives – but, for this house, we bake in hopes to give those less fortunate a momentary escape from store and restaurant leftovers and other food most of us wouldn’t dare eat.

It started 7 years ago, when my sister-in-law asked if I’d bake 10-12 dozen cookies for some of the inmates she was counseling at a local jail. She has, through her church, participated in an outreach program for the better part of a decade. While I toyed with the idea of “rewarding” those incarcerated, I realized that her groups efforts were to expand on the message that these people had hope for rehabilitation and that there were people out here who believed they could make things right and would give them a second chance.

Then Joe and I thought, “Well, why couldn’t we bring some home-baked goodness to those who are struggling just to survive?” With the help of my father-in-law, we found a rescue mission where the occupants worked the grounds and strove to gain additional education so they could get back on their feet. The people here aren’t without sustenance – but they are, for the most part, without goods made especially for them. Their sweets are most often leftovers from local grocery stores – cookies and cakes that are picked up upon their expiration.

Our thought was that we could do something to give them a little taste of home-baked goodness, which they’d probably enjoyed at an earlier time.

Today, that effort has grown into a hundred plus hours of mixing, rolling, cutting, baking and decorating holiday cookies. Last year we delivered nearly 2,000 cookies and this year I’m shooting even higher.

What started as a favor has grown into a tradition rather quickly. Cookies have been, for years, a prime gift for my family. I take “orders” in November and in December pack 5- and 10-lb boxes and send them off via FedEx. With the donation cookies, though, even family has gotten involved. From contributing toward the cost to actually helping “drop” the dough onto pans (it’s my nephews’ way of pitching in) to helping deliver the goods, the event which initially took an afternoon has turned into something much, much bigger.

So, with the deep freezer on and the first pounds of butter ready to be mixed with sugar, I dive back into cookie madness!

This year I’ll be posting updates along the way, so feel free to read and respond. But, if you’re getting that urge to do something in this tight economy, well, nearly every city has a shelter or area where the homeless simply… live. When it comes to doing something for those less fortunate, it’s not all about the money. For many, just knowing someone out there cares enough to take the time to make them something special can play a huge part in getting them through one of the most difficult times of the year.

Too keep up with the baking madness, follow the tag holiday-cookies.