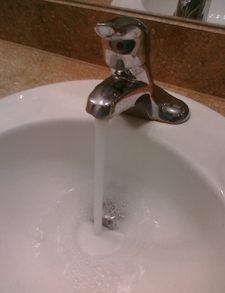 Clean water. It’s a staple in every living being’s life. And yet, so many are doing without.

There are more than 4,200 bloggers writing about water today as part of Blog Action Day 2010, many of whom are bringing attention to the filth other countries find in their drinking water, and how there’s a dire need abroad for clean, potable water. I have opted to take a different approach, by writing about what’s close to my heart (and often on my mind) when it comes to the most basic of necessities.

Blog Action Day is an annual event held every October 15 which unites the world’s bloggers in posting about the same issue on the same day with the aim of sparking a global discussion and driving collective action.

Living in Hurricane Alley there’s a ritual we follow each and every year. Stock a toiletries bag, double-check the first aid kit, have a few changes of clothes and other necessities packed in the event of an evacuation order. Have on hand some decent canned goods, and, most important, have a sufficient supply of drinking water. Unfortunately, many people choose to ignore the warning signs, and, when a storm hits, within hours they’re gathered by the thousands, lined up and waiting for aid trucks to deliver ice and water.

We had more than a week’s notice that Hurricane Katrina would likely affect South Florida – more than enough notice to stock the pantry and fill the jugs. Yet, as soon as the winds subsided, hundreds were calling local radio stations asking, “Where are the relief trucks? Where’s our water? Where’s our ice?” It was amazing how many had disregarded the warnings and advisories, only to wind up standing in line at gas pumps for 8+ hours, desperate to crank up generators so their kids could watch TV. This was in Miami, a city accustomed to the threat and reality of hurricanes making landfall. Yet, what we experienced was nothing compared to other areas.

All those warnings, and, following the storm, six days without power (again, nothing compared to others). My family stood in line not once. We didn’t have to boil water, run a generator (we don’t even have one), or hang out in grocery store parking lots demanding they open their doors. We were prepared.

When the earthquake hit Haiti, I couldn’t help but think back to that uncomfortable, yet not dire, week we spent in Miami. After all, Haiti had no warning, and on a good day, a minimal supply of “clean” water.

When devastation hits others, we’re quick to react with our wallets. We are, after all, a very giving society. But it’s the big picture we’re missing – that, with just a little planning, devastation doesn’t have to be so… devastating.

In America we’ve not experienced long-term neglect when it comes to this precious resource. When tragedy hits, we have it trucked in. Easy, right? We do this without thought of how much water and oil (yes, oil) is wasted to manufacture all those bottles, build and operate all those trucks and thus produce a “drinkable” supply when we already had one before floods and storms hit.

We waste water like there’s no end to it – letting it run for minutes to heat up our showers, flushing after even the lightest of tinkles, and, worst of all, letting all the excess go right down the drain.

In Florida, my husband and I are on a well system. There’s been lots of concern, debate, and even arguments, about the potential of the wells going dry. For the powers-that-be, the fix for this is to carry out initial plans to construct water treatment plants, despite the fact our population is less than half of what was expected prior to the economic downturn and housing market crash. One argument for the city system is that when power goes out, so does the well pump, leaving consumers using – gulp – pool water to flush their toilets. This, somehow, is viewed as a big issue?

The problem starts right at home, with us. Preparation for disaster isn’t enough. We need to pay attention to our wastefulness every day. The good news is, conserving water and leaving a smaller carbon footprint isnt difficult at all.

From composting to filtering water at home and using stainless steel bottles, there’s a lot of green (that’s nature and bucks) to be saved. Believe me, filtering tap water, making your own soda (I have a SodaStream

) and replacing chemicals with natural ingredients (like vinegar and baking soda), isn’t an inconvenience. When you consider how much is wasted in the processing of packaging and “ready to eat” goods, it just makes sense. Having extra on hand in case of unforseen emergencies – as well as preparing for known urgencies – does even more. It saves you a great deal of headache and worry.

Once you’ve found your groove – that is, once you’ve ditched all those cheap, plastic bottles and unnecessary packages of things that just aren’t good for you – count up your savings. Then, take a portion of it and give to a worthy charity, one that’s helping to bring clean water to those who need it the most. Because, for most of America, the resources are already there – we just have to start respecting them.