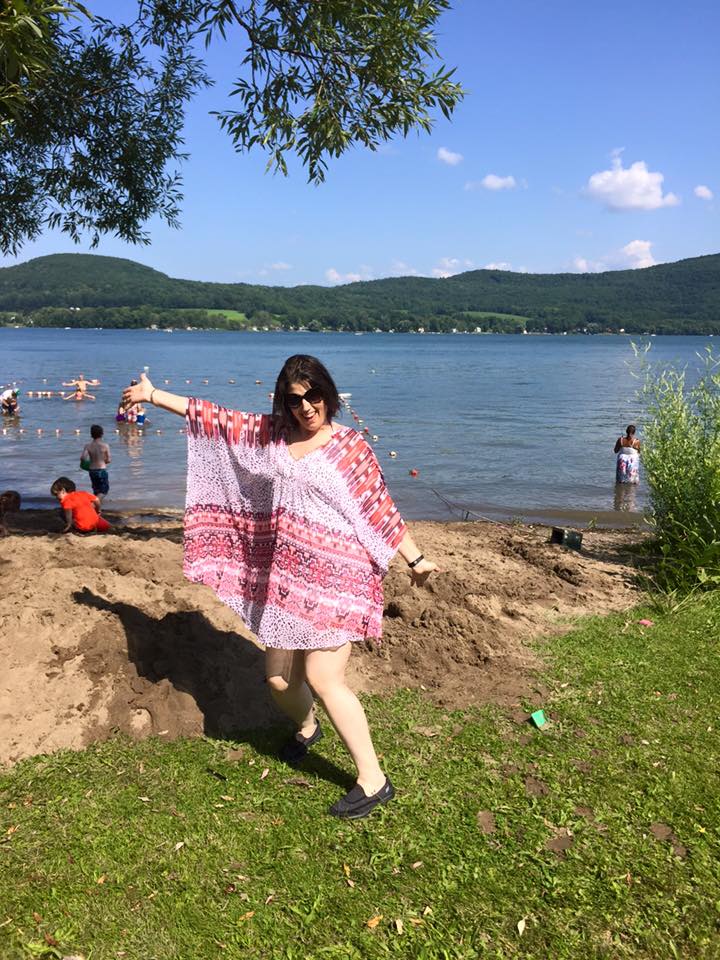 After a 10-day work trip to Arizona (I still have to write about that), I flew to Upstate New York to see my family. It was my first real vacation in nearly 10 years – by real, I mean it lasted more than three days. A week, actually. And while I had a few things to wrap up while sitting at my parent’s kitchen table, the days were mostly filled walking, enjoying the outdoors (something I can’t do much in Florida), reminiscing, and making a whole slew of new memories.

I’ve long since wanted a photo that expressed exactly how I feel when I’m with the people I love. I’ve posed many times, but it’s never quite right. Then, this off-the-cuff shot at the small beach on Canadarago Lake did the trick.

We aren’t the point that we’ll board our dog, Mouse (check out her new Facebook page!), so Joe stayed behind. Confession: As much as I love my husband, and as much as I missed him, we rarely spoke while I was gone. A few text messages here and there, and one short phone call. And that was okay. He made sure the week was all about me.

While back home, I spent less than $30. I relaxed. I unwound. I met relatives I never knew I had. I played Scrabble with my sister, mother and niece. I went for long walks, and even longer drives. I walked barefoot in the grass. I took a dip in the lake – though the “watering hole” the beach gives access to now is in disrepair. I stayed up late, talking with my father. I slept in. I had real pizza and real Chinese food.

Yes, I had work to get back to. I’d be lying if that wasn’t nagging me in the back of my mind. The fact is, though, we all need to unwind now and then. And we should be doing it more often than not. There are many reasons we work hard. Money is only one of them.

It was a two-day drive back, with a stopover at one of my sister’s cabin in North Carolina. From there, I was driving solo. I thought I’d be bored out of my skull, but that last 740 miles was pure freedom. I listened to great music and fell in love with the feel of the pavement beneath me. It was another day, and it was with me, myself and I – the perfect ending to it all.

My travels weren’t without absurdities. I’ll save you from the details about the most disgusting bathroom I’ve ever entered…

My hometown is less than 15 miles from Cooperstown, home of the Baseball Hall of Fame. As you can imagine, you’ll find lots of baseball themed things in the area, including this beer that’s brewed locally.

Some businesses would rather waste money on over-heating water, and risk customer injury. I was surprised to see that management at the Jessup Starbucks would tape a sign on the mirror rather than just call a plumber.

I guess I’m lucky I didn’t visit this rest stop in Hamer, SC at night. The bathrooms had a sign that said they were closed after 8 p.m.

Rules, rules, rules… A reminder to parents about what is expected of their three-year-olds.

Plenty of shots were missed. But I’m sure you’ve had your own chuckles along the highway. Feel free to share them below!