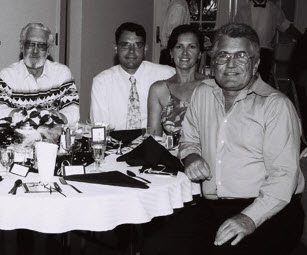 Today I’m a bit of a multi-tasker. When I was younger, I thought multitasking was the ideal way to get a lot done. Turns out it just made everything take longer, and certainly not with best quality as a result. But, today, I’m working on my final slides for International Ecommerce Day, as I’ll be presenting on the topic of ecommerce conversions. I’m doing it alongside dealing with the fact that the world of small business ecommerce just lost one of its early pioneers of “self serve shopping carts.” Bill Weiland passed away, after a 26-year battle with several different occurrences of cancer.

Those who didn’t know Bill might still never hear his name uttered at conferences and major ecommerce news sites. But I’ll fill you in… Back in the very early days of Miva Merchant, Bill was the guy who dove into the backend of MivaScript. While other ridiculously smart people tinkered with backend code to customize how the shopping cart functioned, Bill built “tool kits” – groups of modules that plugged into the cart – and provided step by step instructions on which code to find and replace to get the cart to do various things. His modules helped business owners change how things looked on the screen, calculate shipping a specific way, allow customers to store a wish list, and email product links to friends. All simple things in today’s world. Back then, though, the only way to really get these features as a whole was to pay hordes of money for someone to develop a custom cart – one that you couldn’t update yourself. These “custom carts” were typically choppy in administrative control, and when new security measures emerged, major redevelopment, which cost more time and money, was necessary.

How “back to basics” was Bill’s operation? As one of his early customers, I had to mail him a check. After he received it and it cleared, he sent me the files and instructions I needed to work on my first ecommerce client’s site. He didn’t take credit cards, and PayPal wasn’t yet around. It was all very hands on, and that meant he worked on a very personal level with his customers, as well as fellow developers.

Not long after, Luray Williams (another one of Bill’s loyal customers) and I had a conference call, and we became a threesome in helping store owners get what they needed. Bill developed more modules and wrote custom code. Luray customized and implemented code (and later built modules himself), and I designed and advised clients. Most of the time I was the voice store owners heard. Luray and I handled support through a rather expensive ticket system, and Bill, wanting to work primarily behind the scenes, kept finding new things we could do with Miva Merchant. It was a glorious time. It was a profitable time – both for the three of us and for store owners. Finally, small business ecommerce sites that competed with the big dogs on a functional level were affordable. You see, not everyone who bought Bill’s scripts paid to have them installed or configured. Plenty opted to do it themselves. In short, Bill’s approach to providing affordable plugins meant that small business owners had two options: 1) take the time to read and learn themselves, or 2) pay a little more and let the “team” do it all for them.

Don’t get me wrong. There were other developers who played a big role in making Miva Merchant work for even the smallest of mom and pop stores on  a budget. But no one can dispute that it was Bill Weiland who grabbed the bull by the horns and taught so many through the use of his various “packs” of scripts. Without him, this now enterprise level shopping cart would not be where it is today. Without him, I never would have been approached to write the first official guide to Miva Merchant – an accomplishment I hold dearly, and a project I still continue to this day. Without Bill, we wouldn’t be hearing about so many success stories by developers and small business owners who have grown to make their mark on this humungous “world” we call the internet.

The three of us did not have the “perfect” relationship. I don’t think anyone ever does. At times, we rubbed each other the wrong way. But we also laughed and shared great memories. I remember when we attended the first Miva conference I had booked us a room at the Courtyard by Marriott in San Diego’s Gaslamp District. If you’ve never been, this hotel is in a 1920s-era bank, and it’s truly breathtaking. I’ve taken many friends back there over the years to tour the old vaults and meeting rooms. On that first trip, the three of us – on a budget and wanting to be able to work the entire time – shared a single room. It was the first time we’d all been face-to-face, and I felt honored that these two very smart guys welcomed me as part of a real team. Even if they did roll their eyes as I hung some of my garments on the shower rod to dry. 🙂

I was further honored when Bill and Luray both made the trip to attend my wedding, along with Michael Brock, another developer. After most of the wedding guests had left, we all hung together and reminisced. For years after, we’d spend much time conversing via telephone, email and at the many Miva Merchant conferences we attended.

In January, 2007, after Bill and I got the call about Luray’s passing, I took to the Miva forums to write a tribute. Bill simply could not even speak. While we all worked together, and Bill and I took Luray’s passing hard, I realized that Bill needed much more strength to deal with the loss of one of his best friends. While I authored that post, it really came from both of us. Little did people know that Bill had read over my post many times, giving me feedback, until I’d finally pasted it into the box and clicked “post.” We cried to each other those first few days, over the phone, not really having to say anything. In the foreground, though, it was business as usual for me. I never thought about that until today. I always thought I was just strong when someone I honored and respected so much left this earth. Turns out, I was strong only because Bill needed me to be. He needed, at the time, for me to be the voice for both of us.

This week marks the end of an era. Over the years, Bill and I moved onto other things. He ultimately sold his long running module sets to Miva, and I branched out into additional outlets for businesses, like social media and online marketing. But the “team of three”? That concept never left me. That time of my life has always helped guide me. And, as the last of that group, I realize that the only voice I have is my own. And that’s both humbling and very, very scary. Because, while I know I have what it takes to do it alone, I never wanted to have to sit here, not being able to pick up the phone and ask Luray how he thinks I should tackle a certain issue, or to ask Bill why he can’t just stop trying to school me and just give me the answer. These guys both pushed me, sometimes to the point of me wanting to pull my hair out. And now I know why.

For the past nine years, I’ve often heard Luray’s voice in my head, telling me what to do, and pushing me. Now Bill’s will be there, too. And while it’s difficult to deal with the loss, I am grateful that I will always have these mentors who will continue to guide me, even if they sometimes have to give me swift kicks in the butt to get moving. I imagine myself as quite fortunate to have had people who took that kind of time and chance on little ‘ole me.